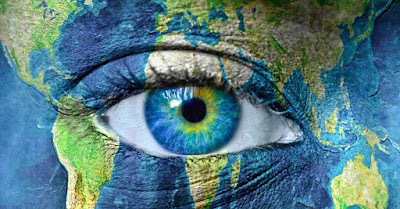 There is more to climate change than meets the eye, it can cause vision impairment

If you were to describe the impact of climate change, you would probably mention extreme heat, snow and glacier melt and weather-related natural disasters. Picture instead a risk to eye health and permanent vision loss, which has now become a public health issue. Although there has been a lot of talk about climate change, there is a dire need for that to be translated into practice.
Pollutants such as sulphur dioxide, chlorofluorocarbons and airborne particles have caused a rise in atmospheric temperature and made the air drier. Additionally, there has been increased penetration of ultraviolet (UV) radiation to the earth’s surface due to ozone layer depletion. As a Third World country, we have done little to cause the problem, but we are suffering more from it. Eyes are vulnerable to environmental pollutants because of their direct exposure to dust, air and UV radiation. The consequences of transient and prolonged exposure to these irritants may either cause eye diseases or interfere with treatment efficacy. Exposure to wood or charcoal cooking fires accelerates the scarring caused by trachoma, which is among the leading infectious causes of blindness worldwide.

Three elements—oxygen, heat and solar radiation—are bad for eye health. Increased penetration of UV causes lens opacity, better known as a cataract. According to the World Health Organisation, 5 percent of the 18 million people with a cataract worldwide got it due to UV radiation. People living in high altitudes are more prone to UV exposure due to the direct reflection of radiation by the snow. Moreover, exposure to UV rays reflected from the snow may cause several corneal degenerative changes on long exposures and snow blindness on short exposures. Snow blindness is a painful temporary blindness experienced in high altitudes due to UV exposure. A triangular pinkish elevation and a fleshy growth in the whitish part of the anterior eye are the consequences of accumulative UV doses.
Studies claim that between 5 to 10 percent of all skin cancers occur in the eyelid due to high exposure of UV in the eye. In fact, an increased amount of UV exposure is a major cause of skin cancer in Australasia. Therefore, governments in these countries operate campaigns telling people to use sunscreen lotion and avoid direct sunlight.
UV radiation can cause pathologic changes in the retina, the inner tunic layer of the eye, which transmits vision signals to the brain. Retinal cells lose their function due to abnormal changes after getting repetitive exposure to UV radiation. These abnormal changes are not reversible and may cause permanent vision loss. Therefore, direct viewing of the sun, for example, in religious sun gazing and during a solar eclipse, and even long hours of daytime solar exposure may lead to permanent retinal diseases.

The good news, however, is that UV exposure is a controllable risk factor. Wearing a hat can reduce UV exposure by 30 percent, and sunglasses can reduce exposure by nearly 100 percent. Therefore, it is important to introduce preventive measures and control schemes. Individuals working outdoors should wear protective sunglasses and full-sleeved clothes and apply sun-blocking lotions. It is necessary to wear UV-blocking sunglasses, prescription glasses or contact lenses with a built-in UV filter. It is also important to wear wide-brimmed hats that shield the eyes from direct sunlight. Eclipse viewing should be avoided unless there is a proper use of protective filters, which absorb UV and infrared radiation. The government and appropriate authorities need to work together to make personal protective devices affordable and accessible to the public. In professional jobs such as farming and traffic control, it is necessary to make these safety measures compulsory.
As Nepal enters a new phase with dreams of industrial revolution and prosperity, it needs to carefully consider ways to reduce air pollution and actively participate in campaigns to prevent climate change and its consequences. There are examples next to our border from which we can learn about the consequences of rapid industrialisation.
While India and China are struggling to recover from pollution, Bhutan stays strong and proud with the distinction of being the world’s only carbon-negative country. With massive opportunities in hydropower, Nepal needs to learn from Bhutan that generates 1,615 MW of renewable energy, one-third of which is exported, directly contributing
to revenue generation. Another example is Finland, which depends on clean power plants and is in the frontline in lessening carbon dioxide emission.
Dev and Marasini are optometrists
Source: The Kathmandu Post
0
Share

30 benefited from cornea transplant in Chitwan

5,657 still have cataract in Dang District.

How to stop eye twitching?