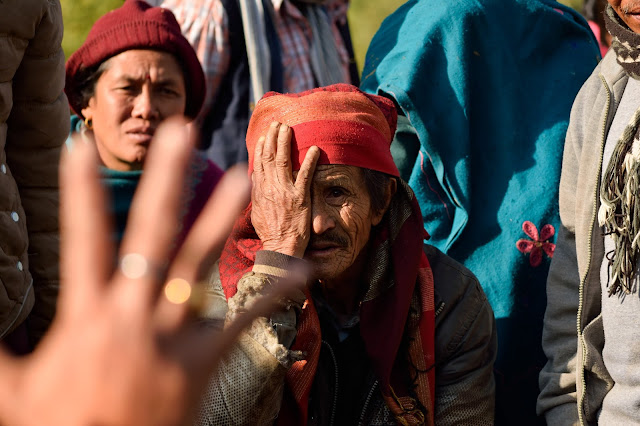 Eye Care in Nepal: Comparing with the past, considerable progress has been made in the field of eye health. This can be taken as a good model for public-private partnership (PPP). Studying the criteria of the World Health Organisation (WHO) Nepal’s status of blindness has declined from 0.81% in 1981 to 0.35 % in 2011. Though the situation of blindness has decreased more than half, there has been no significant decline in the number of the blind as the population of the country has doubled in comparison with that of 1981.

Though considerable progress was achieved in mitigating blindness in the past decades, there is a need to implement more effective programmes to meet the goal of Vision 2020  and WHO  Global Action Plan and a lot of effort should be made to realize the vision of sight for all. In this period, considerable development has been achieved in the sector of infrastructure development also. At present, the services at primary eye care centres/eye hospitals are available in all the districts of the country. The technology applied in eye care has been regularly updated to the global standard.
Considerable progress has also been made in the field of producing human resource in the area of eye care. In 1981 there were a total of seven ophthalmologists in the country. This number has now reached 205. At present, there is one ophthalmologist for an estimated population of 150,000. In 1981 there was not even one optometrist in Nepal. Now there are 160 optometrists in the country. The number of ophthalmic assistants has also reached 425 from zero. The number of other directly involved health workers and nurses has also reached 450 and the number of eye care managers and equipment maintenance personnel is also increasing gradually. The number of necessary human resource necessary for effective management of eye care service in proportion to the pressure of the patients and the population is still a challenge.
One of the important decisions of Nepal Government in the field of eye care is to include eye  care service in the package of basic health service in Nepal Health Sector Strategy (NHSS) III. It  may increase the government ownership in and expansion of eye care sector in the future.  Though it is positive to score significant achievement in the field of eye care services, new problems and challenges are coming up in the field of eye care service.

With all this opportunities and cha llenges the service output of the of the eye care services for the fiscal year 2016 are as given below table: 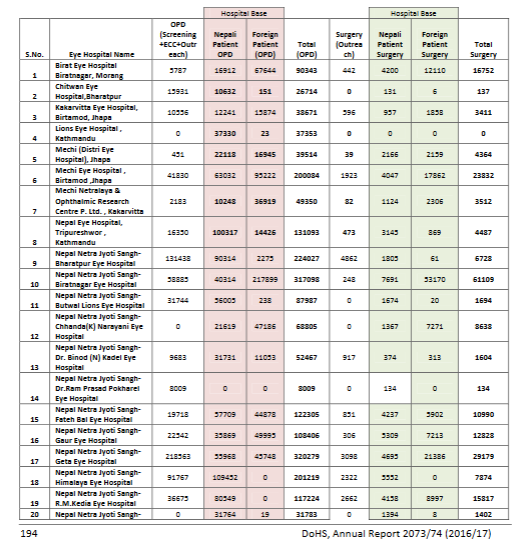 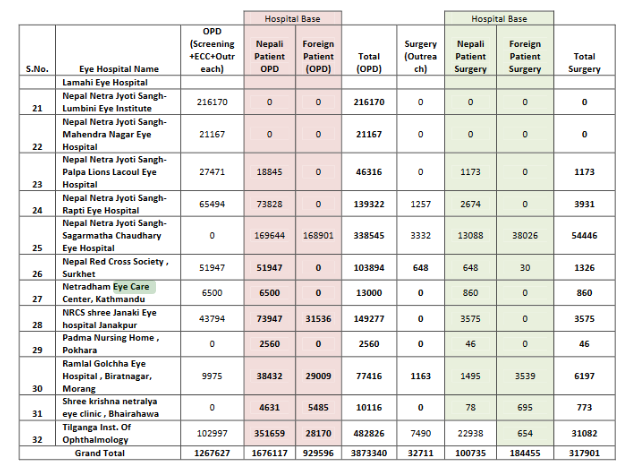