The dye was first synthesized in 1871 by Adolf von Baeyer, Commonly referred to as fluorescein. The dye is used for fluorescein angiography and staining tear film, conjunctiva and cornea. It is fluorescein sodium (C20 H10 Na2 O5). It is the water-soluble salt of fluorescein, also known as resorcinolphthalein sodium, or Uranine, A member of the xanthene group of dyes. It is a highly fluorescent chemical compound synthesized from the petroleum derivatives resorcinol and phthalic anhydride.

Fluorescein is a synthetic organic compound available as a dark orange/red powder soluble in water and alcohol. Fluorescence is a type of photoluminescence that occurs when susceptible molecules known as fluorophores absorb electromagnetic energy, temporarily exciting them to a higher energy state. As the molecules return to their original energy level, they emit light of a different, usually longer wavelength.

Fluorescence occurs naturally in certain compounds and may occasionally be observed in the human eye.

Fluorescence is detectable in concentrations between 0.1% and 0.0000001%. In broad-spectrum illumination, diluted fluorescein sodium appears bright yellow-green in color.  When illuminated with blue light, the yellow-green color intensifies.

The fluorescent properties of this dye have made it useful in a variety of industrial, scientific, military, and medical applications

It was first fluorescent dye used for water tracing purposes.

It has been used as a visible marker for search-and-rescue operations, to track and measure flow dynamics of water sources, map subterranean water courses, track hazardous spill dispersion patterns, identify point sources of pollution, and to detect leaks or obstructions in plumbing and sewage systems.

In ophthalmology, topical application of fluorescein sodium is routinely used for:- 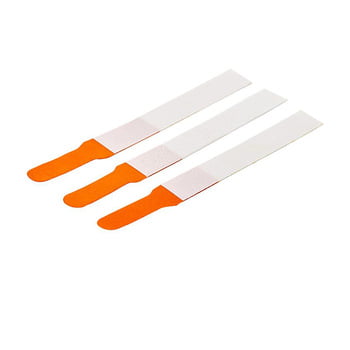 How to use Fluorescein sodium ophthalmic strips?

Fluorescein sodium ophthalmic strips are used to staining of the cornea.
Step 1: place a drop of sterile normal saline on a Fluorescein sodium ophthalmic strips.
Step 2: Then the wet strips are placed in the inferior cul de sac of the eye by pulling down on the lower lid and gently touching the bulbar conjunctiva with the fluorescein strip
Step 3: Ask the patient to blinks eyes which helps to distribute the dye,
Step 4: Turn on the cobalt blue light of slit lamp which is used to determine if there are any corneal epithelial defects.

It has been used for intra-operative assessment of blood flow in surgical resections and grafts with a Wood’s Light to excite fluorescence.
The most common uses of fluorescein angiography are in retinal or choroidal vascular diseases such as Diabetic Retinopathy

Photographic surveillance of passage of fluorescein through retinal and choroidal circulation

A molecule is excited by light of the certain wavelength to a higher energy level, release photon then comes down to the original state

Fluorescein angiography is performed by injecting fluorescein sodium dye as a bolus into a peripheral vein. The normal adult dosage is 500mg and is typically packaged in doses of 5 ml of 10% or 2 ml of 25%. For pediatric patients, the dose is adjusted to 35 mg per 10 pounds of body weight. Upon entering the circulation, approximately 80% of the dye molecules bind to plasma proteins. The remaining unbound or free fluorescein molecules fluoresce when excited with light of the appropriate wavelength. With a molecular weight of 376, fluorescein diffuses freely out of all capillaries except those of the central nervous system, including the retina. 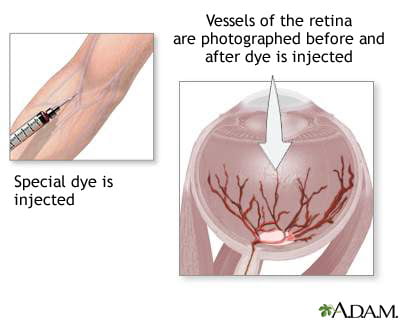 The dye is metabolized by the kidneys and is eliminated through the urine within 24 to 36 hours of administration.

Side effects of intravenous fluorescein include discolouration of the urine for 24 to 36 hours and a slight yellow skin discolouration that fades within a few hours.
Nursing mothers should be cautioned that fluorescein is also excreted in human milk.
Use of fluorescein sodium may be contraindicated in patients with a history of hypersensitivity to fluorescein