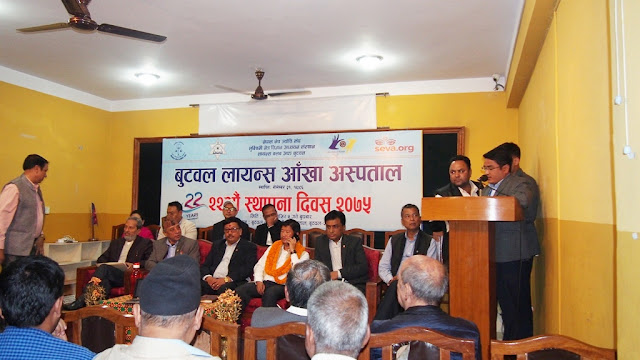 On dated 21st November 2018, Butwal Lions Eye Hospital celebrated its 22nd years of service. It’s been 22 years since the establishment of the Butwal Lions Eye Hospital. Lion Mr. RamSamsher Shrestha was the chairman and Mr. Sudarshan Baral from the Ministry for Social Development of Province 5, was the Chief Guest of the program so organized on this auspicious occasion.
The program was conducted successfully in the presence of, Mr. Bhoj Prasad Shrestha from the parliament(Province 5), Mr. Shivraj Subedi from Butwal Sub-metropolitan city, Mr. Sagar Pratap Rana (Chairman of Nepal Netra Jyoti Sangh Lumbini Eye Institute), MJF Lion Sunil Bajha(Lions District 325 B2, District Governor), PDG MJF Lion Mahendra Narayan Shrestha, Lion Sunil Kasaju (President of Butwal Lions Club), Lioness Ms. Sweta Shrestha(President of Lioness Club of Butwal), Dr. Upendra Dev Bhari (Medical Director of Butwal Lions Eye Hospital), Butwal Eye Hospital Staffs, Previous Presidents and Members of Leo, Lioness and Lions Club.
On this occasion, fruits were distributed to the patients after their eye surgery. Butwal Lions Eye Hospital’s Reports were presented to the guests. Hospital has examined 6,26,437 patients since the establishment among which 19,013 patient received Succesful cataract Surgery.
The chairman inaugurated the event and told that Butwal Lions Eye Hospital will be adding more Facilities for patients. He also added that the hospital is always ready to provide its services to the needy patients. Ministers and Guests were delighted and admired the tasks done by the hospital so far. Ministers wished for the good luck and claimed to help the hospital in the near future.
The program was ended with the thank you speech of Dr. Upendra Bhari( Medical Director). The program was conducted by the Acting Administrator of the hospital, Manoj Kumar Shrestha.