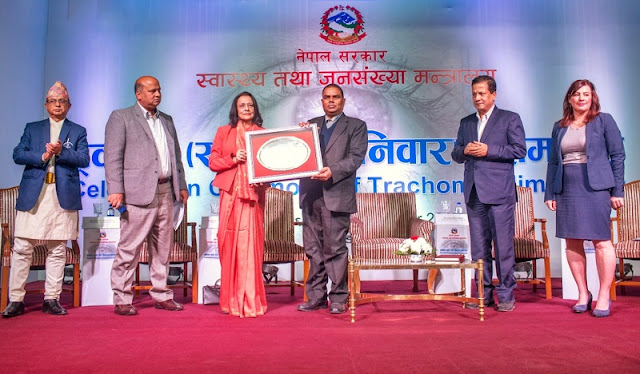 The Government of Nepal (GoN), represented by the Honorable Deputy Prime Minister Mr. Upendra Yadav, formally celebrated Nepal’s historical achievement in eliminating trachoma as a public health problem with Honorary Guest, Dr. Poonam Khetrapal Singh, Regional Director of World Health Organization (WHO) – South East Asia.
Trachoma is an infectious eye disease caused by bacteria bacterium chlamydia trachomatis and leads to blindness when left untreated. It is one of the world’s oldest infectious diseases, and was the second leading cause of avoidable blindness in Nepal.
The wide-spread existence of trachoma in Nepal has been recognized since 1981 when a blindness survey confirmed the extent of the problem, and in May 2018, WHO Headquarters had validated Nepal for having eliminated trachoma as a public health problem. Nepal is the first country in WHO’s South-East Asia Region (SEAR) to defeat the world’s leading infectious cause of blindness. Today’s celebration was an occasion to recognize the agencies and individuals who made this remarkable achievement possible.
Dr. Singh handed a “Elimination of Trachoma” Plaque to Deputy Prime Minister and Minister of Health, and awarded a special citation to professor Dr. Tirtha Prasad Mishra, Chairman of Nepal Netra Jyoti Sangha (NNJS), for their vital contribution towards this historic achievement.
Read also:
WHO Validates Trachoma Elimination in Nepal
Nepal Eliminates Trachoma 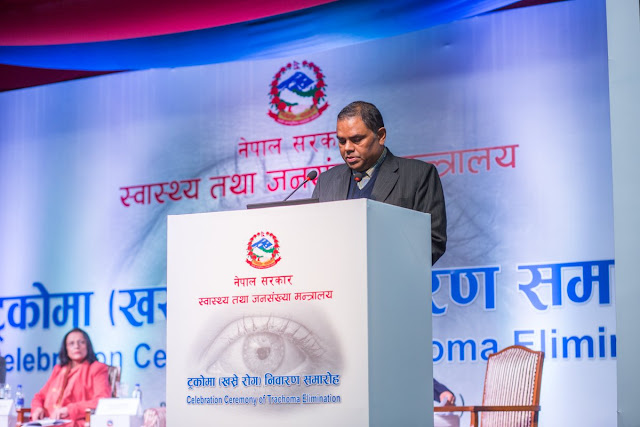 Three organizations – NNJS, Research Triangle Institute (RTI) International, and Tilganga Institute of Ophthalmology – and nine individuals who had significantly contributed to this achievement were also honoured with letters of appreciation from the Honorable Deputy Prime Minister. Honourable Deputy Prime Minister, Mr Upendra Yadav congratulated respective teams in the Ministry and Departments who oversighted this programme and provided technical guidance during the implementation. He also commended the Ministry of Education, Department of Water Supply and Sewerage (DWSS), and all national and international partners for their collaborative efforts.
In 2002, the National Trachoma Programme (NTP) was launched with NNJS, MoHP, and DWSS as the main implementers. Financial support was provided by USAID, ITI, RTI International – ENVISION, Helen Keller International, while technical support was given by WHO.
“This is the best example of a public-private partnership, from our own country, on how we achieved this historical success in public health. This inspires me to think of other areas and opportunities where such partnerships could make real differences in the lives of the people”, stated Minister Yadav.
The ceremony was also attended by dignitaries from MoHP, DWSS, Nepal Association of Blinds, International Trachoma Initiative (ITI), Hellen Keller Foundation, National Tuberculosis Centre, National Public Health Laboratory, NNJS, RTI – ENVISION, USAID, WHO, Indian Embassy, hospitals, and other line ministries.
Dr. Singh stated, “Nepal’s elimination of trachoma as a public health problem is an achievement to be immensely proud of. Not only does it speak of your enduring sense of mission, your grit, and resolve with which you pursued it, but it also underscores the wisdom of the implemented strategy.” 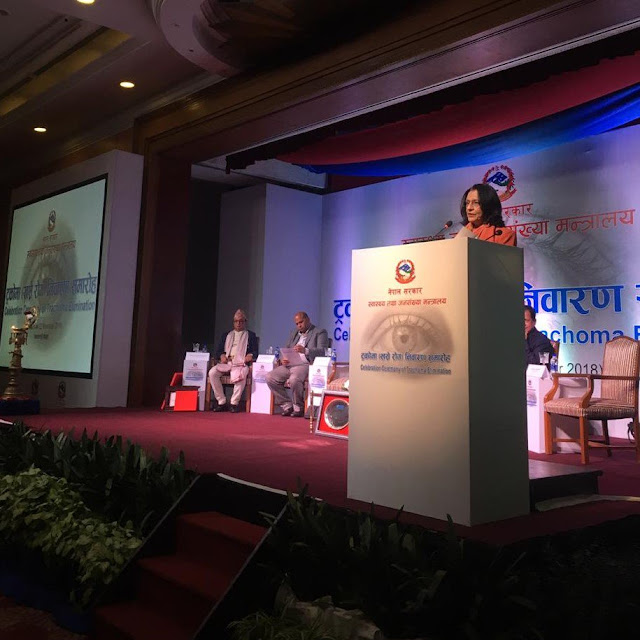 One of the main strategies implemented was the “SAFE” (Surgery, Antibiotics, Facial cleanliness, and Environmental improvement) strategy, as advised by WHO. It was the combination of offering eye surgery to people who had already an advanced stage of the disease, giving once a year specific antibiotic to everyone in the districts affected by the diseases, promoting to regularly wash hands and face, and improving cleanliness in the home and environment that has led to reducing the disease from a major public health problem to a minor one.
She also highlighted key takeaways form Nepal’s success of focusing resources on remote, neglected, or marginalized populations, and a finely tuned surveillance system that can gauge programme efficacy and target resources accordingly.
Minister Yadav urged all to replicate this excellent public private partnership to address other neglected tropical diseases (NTDs) such as Lymphatic Filariasis and Kala Azar – which are targeted for elimination – and leprosy where efforts are still needed to eliminate at district level. 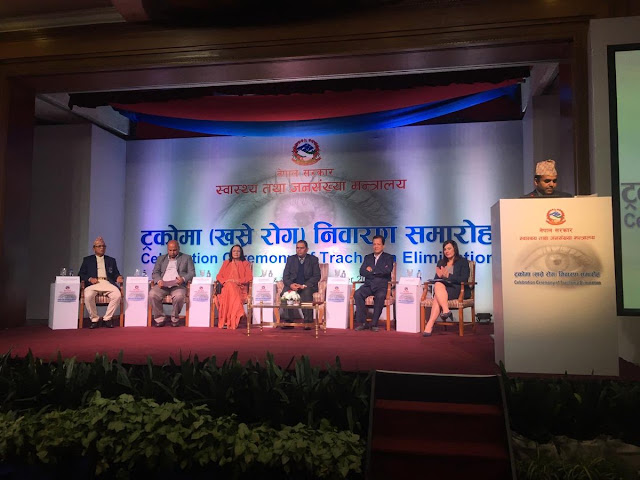 Partners stressed that changes must be made at the environmental level and in resource allocation. Protection from the fly vector of trachoma requires proper disposal of human faeces. This requires infrastructure, education and behavior change across population.
Even after achieving elimination, work must continue to ensure the disease does not resurface.
Useful Articles: People Barely Blink Due to pain
Source: WHO
0
Share