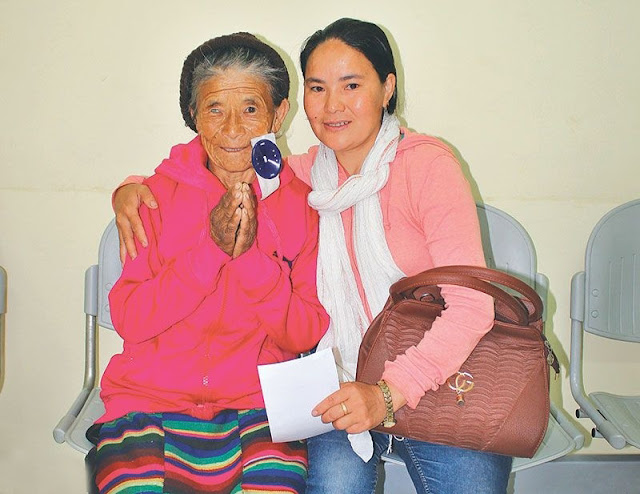 Dolma Yangjong Lama of a remote rural municipality that takes 7 days to walk from headquarter of Gorkha District(Nepal), went to Kathmandu for the first time. 75 Years old Dolma lives in Chumche of Tibet and she was brought to Kathmandu by her daughter Dolma.
After 12 years, Dolma went to see her mother in her village and found her blind. She found that her mother was blind for 7 years. Mother dolma used to eat what she was given, she sat where other family members left her. Knowing everything, daughter dolma took mother to the Kathmandu in a Helicopter.
Daughter dolma had gone to Kuwait for job purpose many years ago. She ended up in jail for charge she faced for the murder of her friend at work in Kuwait. Dolma had no money, so he managed a loan of 20 thousand for a helicopter to take her mother to Kathmandu for a check-up. Tilganga Eye Hospital helped them with free check-up after the news about dolma and her mother was published in the newspaper. Dolma told, “Mother touched my cheeks and Smiled, seeing me after years”.
Mother dolma was completely blind in her Right eye while her left eye had dense cataract. Dr Sanduk Ruit Himself did the surgery of mother dolma. Mother dolma told,”  I Never thought, I could see again, Dr Sir Helped me see again”. She said she is happy after her vision was restored.
Photo source- Kantipur
0
Share

Glaucoma story of a patient