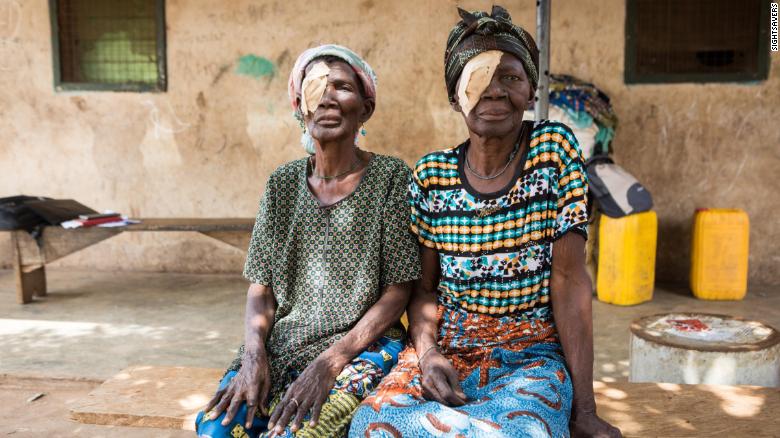 0
Share FacebookTwitterGoogle+ReddItWhatsAppPinterestEmail
People barely blink due to pain, that takes away the little vision what’s left. They tie scarves around the head to keep lids open. They epilate the eyelashes by themselves with forceps. That helps to in pain relief. The hair is thought to be the culprit while everything is caused by the bacterium Chlamydia Trachomatis. The infection leads to scarring of the inner part of lids which turns inward by time. The inward eyelashes rub the eyeball with every eye moment.
“The pain is excruciating,” said Simon Bush, director of the neglected tropical diseases program at international nongovernmental organization Sightsavers. “People tell me it’s like sandpaper scratching over your eye every time you blink.”
The Transparent cornea becomes opacified, blindness is invited.
“Once you get to a particular stage, it’s irreversible,” Bush said.
A preventable eye disease causing blindness in 2million people while 200 million are at risk worldwide.
Oman was first to eliminate the Trachoma eye disease as a public health problem in 2012. Morocco in 2016, Cambodia, Mexico and Laos in 2017 while Nepal also achieved the goal last month. Ghana also followed suit this month. Ghana is the first country to eliminate trachoma in sub-Saharan  Africa. These all countries were once struggling with the disease. They have shown the world that they can beat it.
“Ghana has eliminated a painful eye disease which has devastated the lives of millions of its most vulnerable people for years,” Bush said. “But the fight does not end here. Many other countries are on the path of elimination and must continue to push for the elimination of trachoma and other neglected tropical diseases across the world.”

There are five levels of trachoma starting from infection causing the follicular inflammation in the inner part of the eyelids. At least one eyelash turned inward rubbing the cornea. The cornea appears cloudy by time from scarring. The vision is impaired eventually making the person blind.
“The disease thrives in areas that are traditionally short of water,” Bush said of the “trachoma belt,” which spans from Northern Nigeria to South Sudan.
In these regions, water is a precious resource, he adds, meaning people might not be able to spare enough to wash their or their child’s face, aiding the spread of infection.
Trachoma spreads through contact with liquid from the eyes or nose of an infected person or contact with contaminated materials, such as clothing or towels. Flies can also spread infections through contact with people’s faces.
Washing the hands, face regularly helps in preventing the spread of bacterium. People have to make choices whether to drink it or to wash with water.
As a result, in 2000, an estimated 2.8 million people were at risk of contracting trachoma in Ghana alone, with women and children the most affected.
“Trachoma is a household problem,” said Fuseini Kwadja, an ophthalmic nurse in Tamale, Ghana, who worked on the campaign to end the disease since its inception 20 years ago.
He describes how people would pull lashes from infected person and do not wash hands. Family members would share towel, children had face covered with flies with nasal discharge all over the face.
Fuseini Kwadja- “People were blind because they were ignorant”
Global initiative for control was initiated in 1998 by World Health Organization. Four steps strategy was introduced to not only aware but also to treat their infection before irreversible blindness would happen.

The strategy is called SAFE as it includes Surgery, Antibiotics, Facial cleanliness and Environmental Sanitation.
Surgery to trichiasis i.e. inverted eyelids could be done at people’s home. The inverted eyelid is everted to counter the inverting force of the tarsal plate( The cartilage inside the lid). Strong but chlamydia infection treating antibiotics called azithromycin to be given as a single dose. Pfizer, american pharmaceuticals makes the antibiotics which is then donated to all the affected regions all around the globe. Pfizer will be donating the medicine till 2025.
The antibiotics were given to everyone in the affected villages including those who are not even infected. They say it was done to get rid of the infection from the whole environment. The reoccurrence of the disease can be seen with time as the goal is to eliminate not to eradicate.
In this case, it meant bringing infections down to a low enough level that people don’t go blind 20 years later from repeated exposure to infections.
Nurses had to be trained, drugs supplied and many affected children and communities found, Kwadja said. There was a case where he met a village chief who had an active infection and was in the risk of going blind. Kwaja performed the trichiasis surgery and the chief’s eye was somewhat better. He began his daily job. Kwadja says he has done more than 400 T.T Surgery.
Crucial too to keeping environments clean was the provision of latrines and boreholes by organizations such as World Vision International.
Ghana’s government “put an emphasis on building safe and accessible water sources and latrines,” Bush said, adding that in regions such as northern Ghana, animals represent wealth and are kept close to home to ensure their safety, meaning their excretions were also close by — and so were disease-spreading flies.
Kwadja also recalls women who could not look after their children or their homes due to the pain every time they blinked. Treatment soon changed that.
After many cases like these, both in Ghana and more globally, the burden of the disease is finally being flipped.
Twenty years after efforts began to fight this leading cause of infectious blindness, teams are seeing remarkable and continuous progress.
“Communities are happier,” Kwadja said, adding that when he returns to the affected villages today, he sees people smiling and pain-free, with fresh-faced children.
Global success
“Ghana is a success story,” said David Mabey, professor of communicable diseases at the London School of Hygiene and Tropical Medicine. Mabey believes the general commitment to growth and improvement by a committed Ghanaian Ministry of Health has helped the country prosper. It is “very organized.”
Mabey has worked on trachoma control for more than 30 years, particularly in the Gambia, where he believes elimination will come next. “They have reached elimination but have not yet filed the paperwork to WHO.”
China, Iran, Myanmar, and Iran are also believed to have reached their targets, according to Sightsavers.
Mabey hopes elimination will be a rolling trend across the continent — and globally — but fears that the persistence of trachoma in unstable regions, such as Northern Nigeria and South Sudan, will prove challenging.
Mabey also stresses that the target in all countries is elimination, not eradication, meaning workers are not looking to end the infections altogether, just to make them low enough that’s the issue is not a public health concern.
Bush recently conducted a drug distribution effort in Yemen, which also faces challenges in terms of access and security, and while coverage was good, “the challenge will be to keep that going,” he said.
“Getting to the end of the program is really quite complex,” Bush said. The final challenge will be the high-risk regions. But he believes that blindness can be ended in all affected countries.
“To end it globally, we have to work in those areas,” he said. “It is all totally avoidable blindness.”
Reference from CNN
0
Share

Is your child hooked to mobile? High time to wean off the child from this bad habit