0
Share FacebookTwitterGoogle+ReddItWhatsAppPinterestEmail
A visual prosthesis, often referred to as a bionic eye, is an experimental visual device intended to restore functional vision in those suffering from partial or total blindness. Visual prostheses are being studied worldwide. There are many types of visual prostheses being proposed.

“Electrically stimulating nerve tissues associated with vision (such as the retina) to help transmit electrical signals with visual information to the brain through intact neural networks.” This is the basic concept of the visual prosthesis. This idea is rational and feasible, and therefore has sparked Research and Development throughout the world.

There is more than one specification for the prosthesis. Many types of prostheses are being proposed because of its potential for the development of various types of devices with existing technologies. Such devices take into consideration patient condition, nerve tissue subject to stimulation, and their role in the visual network. Let us introduce a representative prosthesis being researched and developed. These devices can be categorized in many ways; however, a common categorization would be the relationship between electrodes and tissues targeted for electrical stimulation.

Totally implantable system with all functions required for artificial vision is not possible with the present technology for any type of prosthesis. The current system is designed with electrodes implanted in the body working together with several devices worn outside the body. 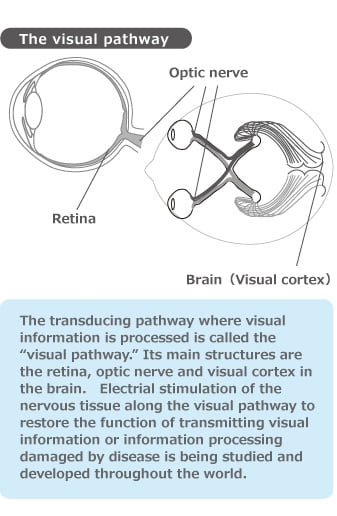 The retina is the first nerve tissue in visual network that generates electrical signals. A retinal implant is a type that stimulates the retina with electrodes. This type of visual prosthesis is also called an artificial retina. The retina is a membrane with a 3D layer structure. There are many options regarding how to stimulate retina and the direction from which to stimulate. There are 3 major methods.

To know about how the visual prostheses or a binoic eye works. Watch the videos below.

Coronavirus and Your Eyes (AAO) : COVID-19

Blurry Vision in the Morning : Reasons and How to Get Rid of…